And the single family loan limit is not the only one going up.  The limits for duplexes, triplexes and four-plexes are going up as well:

How does that compare to Fannie?

The mechanics and some history

FHA loan limits are established annually, subject to a ceiling and a floor. In the Portland Metropolitan Statistical Area (MSA), the maximum loan amount for a single family home is 115% of the highest median sales price for any year, 2008 to the year prior to the year being set. The limits for plexes are set using multiples of the single family amount.

During the throes of the mortgage crisis and resulting recession, Congress, through the Economic Stimulus Act of 2008, gave special authority to FHA to lend at higher-than-normal loan limits. The Act pinned FHA loan limits to the Fannie Mae limit of $417,000 for a single family home.  Technically speaking, Fannie Mae loan limits should have dropped as housing prices dropped, but in an effort to not kick a housing market that was already down, regulators decided to hold loan limits steady. That meant FHA loan limits held steady, as well.

And it was a good darned thing. For a few years there, while banks were over in a corner licking their wounds and dealing with short sales and foreclosures, no else was lending money all that enthusiastically, never mind lending money to borrowers with little money down and/or less than perfect credit. FHA effectively and efficiently stepped in to fill the void, going from a mere 4.5% of purchase loans closed in 2005 and 2006 to whopping 24% to 33% during the Great Recession. 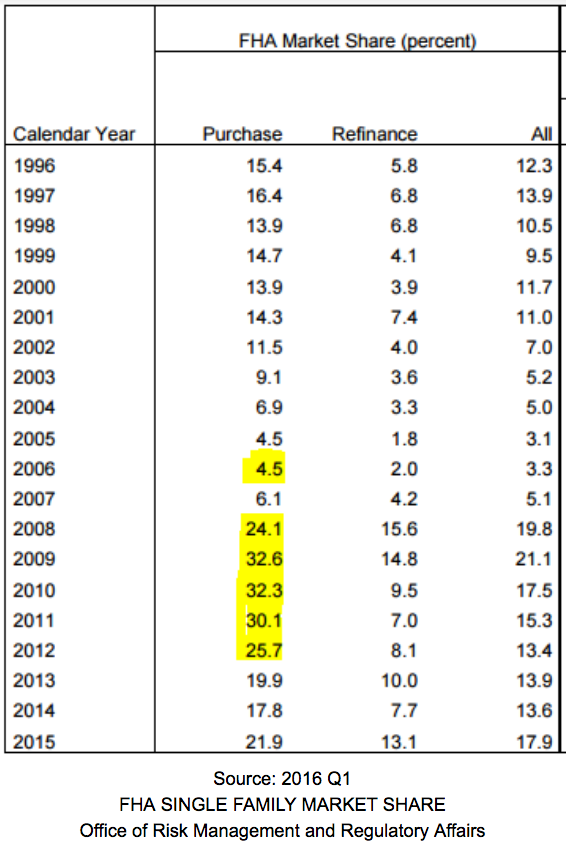 This was anything but an accident.  One might even say it was by design. FHA was, after all, formed in 1934, during the Great Depression to lend money to homebuyers during a time of banking crisis and great economic turmoil. This now makes two times that FHA has saved our bacon (thanks, FHA!).

I suspect there’s at least one or two of you reading this and thinking, FHA? Who cares about FHA loans… nobody does those anymore. Well, hang onto your hats. In my next (thrilling) post, I aim to debunk some myths about FHA loans and share some compelling reasons why FHA is still a relevant and important loan program. Become a fan of the Workshop Mortgage Team on Facebook you won’t miss a single (mesmerizing) word.